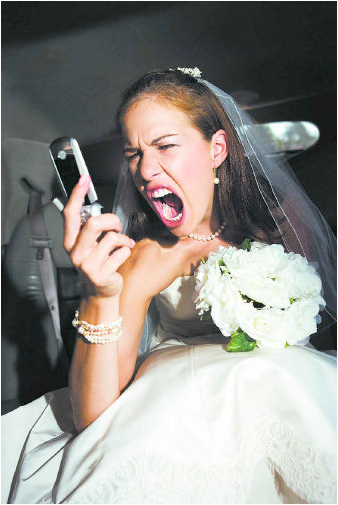 Now, I truly hate the word “Bridezilla” and even though I’ve been in the wedding world for years, most people I know who actually work in this industry do not use this word. It’s a word created by the media with the obvious meaning that a bride has turned into a monster while planning her wedding. Now, I wouldn’t go so far as to call anyone a monster, but I would be lying if I didn’t admit that some people get a bit more worked up than others during the wedding plans. Not that I can’t relate or completely empathize, but emotions run high and some people are just better with stress than others. With this being said, I was really excited when one of my past clients, who admits, at this point, that stress got to her in the worst way, wanted to share some of her top regrets after planning her wedding. She’s going to stay anonymous, of course, but maybe all of us can learn a thing or two from her experience:

1. I cared WAY too much about what people think: I was so worried about being perfect and having the perfect wedding day that I didn’t enjoy the planning or the day. If I would have really took the time to have the wedding day I wanted and not what I thought people expected, I know I would have been able to enjoy things much more.


2. I lost sight of the true meaning of the day: In the beginning all I wanted was to marry my one and only. In the end, all I focused on was a party. I was rude to my husband, my family and my vendors just because it was “my day.” I realized much too late that it’s his day too. After thinking back on my actions, at this point, I just feel lucky that he loved me enough to see past my temporary insanity and marry me anyway.


3. I used the words “It’s MY wedding!” as an excuse for everything: Past the age of 12, throwing tantrums when things don’t go your way stops being cute. I know I’m not alone in this, but if you are an adult woman and are throwing a fit in front of everyone you know because you can’t get your way, you need to have a reality check. You may be justifying your actions, but no one else is.


4. I didn’t care about others at all. One of my best friend’s got pregnant after many months of trying hard to do so. All I could think was “How could she do this to me?” instead of “Good for her!” I was so self centered that I damaged relationships with people I care about all while justifying it away as being a “normal” bride.

5. I was rude to my vendors. From day one if I heard anything that wasn’t what I wanted to hear, you better believe my vendors knew about it. I fired several. Begged some of them to come back after realizing they weren’t so bad after all. And overall just disrespected them and their expertise. On the wedding day, all were very professional, but also chilly. Though they did their job they were disgruntled to be a part of my wedding day rather than being thrilled to share my day with me.


6. I looked for things to go wrong. With my pressure to be perfect, instead of spending my wedding day focusing on what was going right, I spent the day looking for things that were going wrong. I missed the meaning behind my father’s toast because I noticed we were running 10 minutes late in the timeline we had planned. In the big scheme of things, those 10 minutes were so insignificant compared to the words my father was sharing with me at that moment.


Thank you, “Bridezilla”, for sharing your thoughts with our readers!

Do any of you have any bad moments you want to share? I would be happy to post them if you think a current bride could learn from your mistakes!